Tirant lo Blanch builds a bridge between the Middle Ages and the Renaissance, as in its pages the chivalrous tradition of the adventures novel, with its copious anecdotes and the rudimentary character of the construction, is refined and enriched with formal subtleties, humor and irony. These features already announce the great narrative literature of the Golden Age, and especially Cervantes, a reader who took advantage of Joanot Martorell, whom he honored in Don Quixote except his novel of the inquisitorial cream and calling it "the best book in the world." Although he was born into the novel of chivalry, Tirant lo Blanch goes much further than congeners because the spirit that encourages him, the open-mindedness and the richness of his artistic invoice give him an aspect of modernity, absent in the others, even the best ones, such as the Amadís de Gaula or Tristany de Leonís. That's why the great Valencian novel, which for many centuries was - because of absurd prejudices and a repressive policy against the language in which it was written - unfairly relegated in libraries and academies, far from the general public, has returned to the contemporary literary life with magnificence. He has conquered in the last thirty years, in the original language and in old or new translations - to Spanish, German, Italian and French, among others - not only the interest of university critics, but of common readers and quickly, they are the ones who keep the books alive, fresh and changing or, with their indifference, turn them into museum pieces. 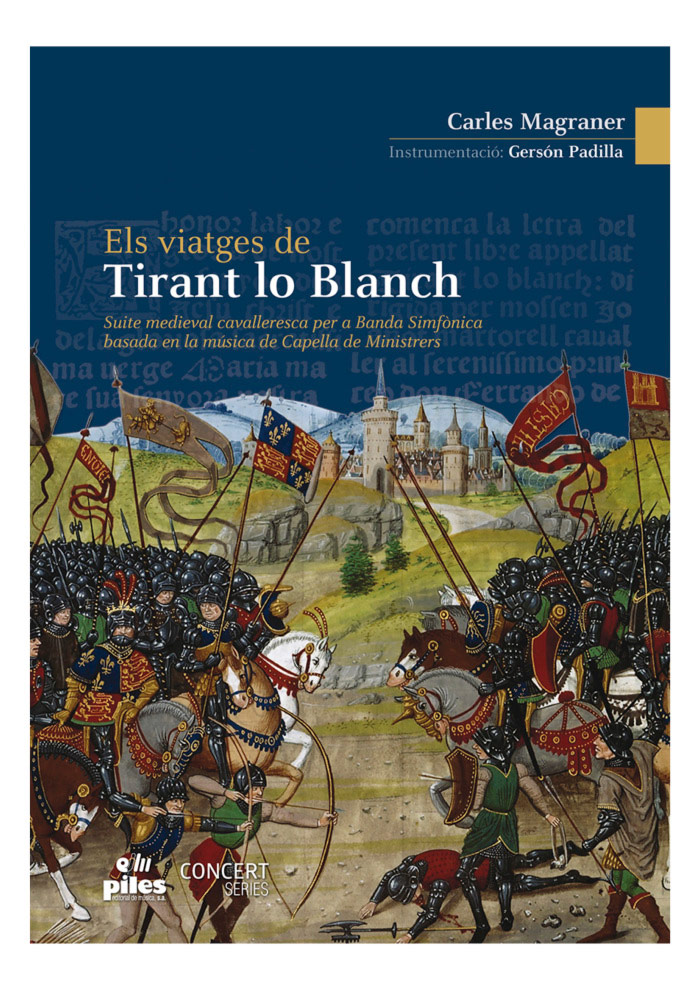 With this composition for symphonic band, Carles Magraner proposes a musical tour through the places where Tirant was, closely related to the trajectory and life of Joanot Martorell. The musical works collected in this medieval suite are grouped into six very differentiated blocks that move us from England, Burgundy, Aragon (Sicily and Rodes) to Constantinople (Istanbul), collecting the music of the most important Renaissance courts and the exoticism of the Empire Byzantine or Tirant battles in Africa, with Andalusian repertoire.

Tirant lo Blanch, of which Cervantes wrote that «by his style, this is the best book in the world» is one of the great novels of universal medieval literature and one of the titles that opens the path of literature modernity to Europe. Written by Joanot Martorell, in collaboration with Martí Joan de Galba, and published in Valencia in 1490, in the Valencian Golden Age, tells the chivalrous adventures of Tirant lo Blanch through the Mediterranean, reflecting with a very direct realism and great expressiveness of the chivalrous ideals of the time, which will mark the items of chivalry novel in the centuries thereafter.

This medieval suite for the symphonic band, edited by Piles, captures the literary expressiveness of the work through the musical resources offered in particular by the instrumental training on the one hand, exploiting the thymic mechanisms of the wind and percussion instruments. An unknown repertoire for band musicians, which embraces the essence of our rich musical heritage destined to be performed by bands of the Valencian Community.